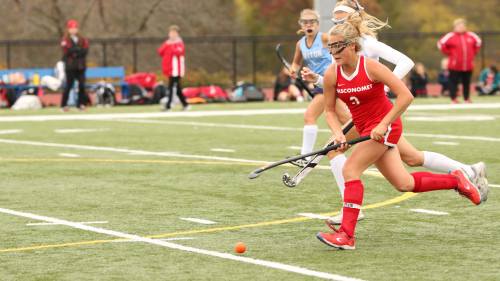 This afternoon the Lady Chieftains (14-0-2) put up five of them, including four in the first half, and that was enough for a field hockey win over Triton, 5-2.

That Masco scored was no surprise; they now have sixty-nine goals in sixteen games.

That Triton (10-4-2) scored against Masco was a big surprise. Why?  The last time the Vikings had a goal against the Chieftains was on September 11, 2015!  That shutout lasted seven games.

Gianna Conte had a goal and an assist for the Vikings

D1 commit (UMass Lowell) Gianna Conte assisted on Triton’s first goal (first half) and tallied their second one in the second half.

Junior Brianna Hood was the Viking set up in the first half.  That goals evened things at 1-1.

The Lady Chieftains responded with three unanswered goals over a ten-minute segment.

“I was proud of the girls for fighting back after being scored on,” said Masco coach Maggie Bridgeo.  “It hasn’t happened very often.”  The LC’s had only allowed SIX goals in their previous fifteen contests.